Q and A With Kyllbreth and Band

This week we are lucky to have Kyllbreth, lead singer of the band named above, with us to discuss their new record, “Too Many Guts”. Our readers will ask questions about the provocative title as well as how the group came up with their unique name and art style.

Ronin Asylum: We are so glad you took the time to meet with us today. Our readers have been asking a lot of questions about you and your new band that for obvious reasons we just couldn’t answer. The band is clearly making waves with “Too Many Guts” being the first Death Metal record nominated for a Saturn award. What inspired your label to submit your work to the Academy of Science Fiction, and why was it ever accepted?

Kyllbreth: We don’t like to use titles when we talk about our music.

RA: Like what titles do you try and avoid? Metal or science fiction?

KB: Any word or name that describes a person or a work of art.

RA: So you mean anything that conforms to the definition of the word title?

RA: Fantastic. Ok let’s move on to our readers’ questions. First up @BillTacoPants asks, “Is Kyllbreth a biblical name and what made you choose it?”

KB: That sounds like a really stupid question. But it’s not! In the Sanhedrin 38b of the Talmud, Adam was said to have initially been created as a Golem made from dust. Yahweh breathed life into the shapeless husk and it was transformed into the Adam we all know today. The Golem was then given to a Rabbi named Judah Loew ben Bezalel Kyllbreth who taught it to walk and perform basic functions like sweeping the floors and eating scrolls. My parents were inspired by this story and gave me the name.

RA: You mean that’s your given name?

RA: @Megastoredon asks, “Why did you choose Death Metal to express yourself, and If you had to choose another genre what would it be?

KB: Great question. I don’t consider what we do now as Death Metal, but more of an offshoot called DisasterCore. We use instrumentations you won’t find in traditional Death Metal, and even our inspiration comes from widely different sources. For example, instead of a YouTube video of someone being pulled apart by sharks we would focus on the natural rhythms created by shoes in the dryer. If the dryer is in a particularly dark room with elevated humidity you have what could become a DisasterCore scenario. If I had to choose another form of expression it would be free prose or adult contemporary.

RA: What are some of the alternative instrumentations you would use?

KB: As I said shoes in the dryer would be a great start.

RA: I thought you meant that was just inspirational to you. You mean you would actually record shoes spinning in a dryer?

KB: Yes, but that goes hand in hand with many of the rhythmic and tempo choices we have made on the new record.

RA: I’m glad you mentioned that because that is in line with one of my questions. Why does the band change tempos at random intervals? It seems like you speed up and slow down throughout the album with individuals playing different tempos at the same time in some cases.

KB: Artistically we have chosen not to use a click track of any kind while recording. We feel it limits the band’s ability to express itself. Instead of restricting a section of a song to 250 beats per minute, we open up the speed gates and play as fast as we can. Sometimes that’s 250 beats per minute, sometimes it’s 240 or 190 or whatever. It helps expose who we are in the moment, not some predefined tempo designed to hold the song together. Also if the drummer gets tired in the middle of a blast beat this gives him the option of expressing himself at a slower tempo. Click tracks are for Death Metal, this is DisasterCore.

RA: @StinkFinger69 asks, “Why have you chosen to move away from black and white makeup for the less traditional black only makeup? Also does it bother you that no one has ever actually seen you because of this?” 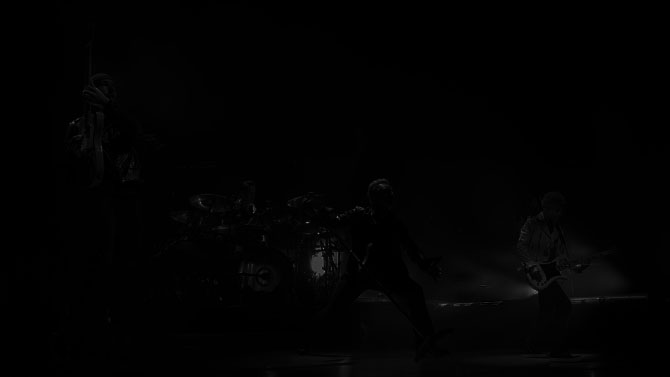 The band on stage.

KB It’s called corpse paint, not makeup. And yes we have had some issues with the all black PAINT as well as all black clothing under black lights behind black curtains. Our label, Gore in Bulk Records, have in the past asked us to try and be more visible to the live audience but that just isn’t who we are.

RA: @DecayedSmurf99 asks, “Although I can’t see you or the band in the pics it looks like your photo shoots are always in a dark forest. Are you actually in the picture and why? 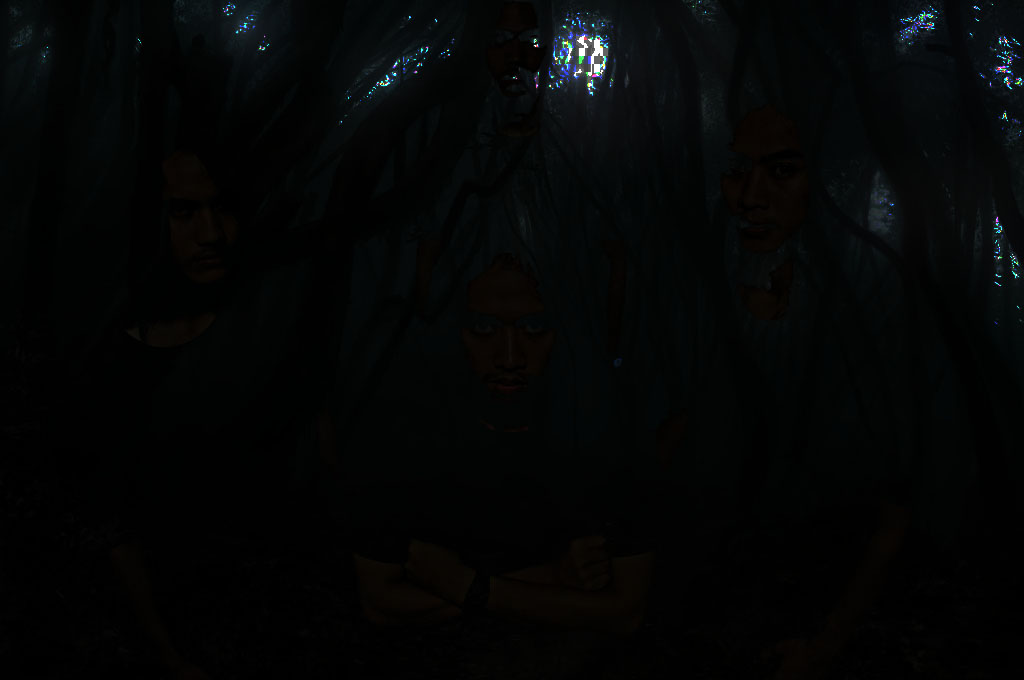 One of the forest shoots.

KB: The forest symbolizes man’s earliest, bestial beginnings. The primal force that drives us to build, to create, to always push forward. We are in the pictures to symbolize the band in the woods creating, driving and whatnot.

RA: One last question. What is the name of your current band?

KB: We have left a few clues in the logo but we prefer our listeners decide for themselves what they think the name of the band is. This let’s our fans be a part of the experience.

RA: Fantastic. Good luck on the tour. We hope to see you again next month in Belgium.

KB: Thanks for having me.