HEALLYEAH is called a supergroup, not because they are awesome (which they are) but because each member enjoyed success in another band before they joined together. HELLYAH is:

It is important to note that the dates mentioned are when the members left their former bands, but not when they joined HELLYEAH. Most members past and present were members of HELLYEAH as well as their other band for a time. This crossover appears to be diminishing and that is either leading to or is caused by the success the band in now enjoying.

HELLYEAH has a bone crunching sound derived from a bottom heavy mix and guitars tuned down at least two full steps to C as on the crazy badass X.

The first track is !, however this is just an intro into the first song X. This song perfectly informs the listener what is about to happen over the next 45 minutes. The rhythmic shift that leads in to the chorus is a perfect set up for the groove that drives the rest of the song home. This is my favorite track on the record and I’ve tried to wear it out while I was writing this but I’ll just start it over.

Scratch a Lie again drops way low and pounds the listener with a deep groove. Chad Gray almost raps sections of the verse which should be distracting but for some reason melds into the overall song in a way that I found very organic. This bands disparate past work seeps into this song very well. You hear Vinnie’s powerful southern style backbeat coupled with Chad Grey’s and Tom Maxwell’s fringe weirdness coalesce into something that is greater than the sum of its parts in this head banging chorus that will not tolerate you just STANDING THERE!

Be Undeniable is what an anthem would sound like fired out of a cannon. Again we hear a very rap influenced vocal rhythm that works, if not as well as it did in Scratch a Lie. A vocal distressor is in the FX stack on all of Chad Grays tracks but it’s really turned up to 11 here. It may actually be a bit too much here as the aggressive high end begins to bleed over and distort the tones around it. Might want to back it off a bit there.

Human is a groove feast that I’m not getting tired of any time soon. The dynamic shift into the chorus is a beautiful thing. The verse suffers a bit from the upfront drums burying some of the rhythm guitar but the track kicks enough ass to overcome this.

Love Falls shifts gears in a big way and almost sounds like an 80’s throwback song played by a powerhouse band or marauders.
Seriously listen to the verses as they transition to the pre-chorus and imagine it being performed by The Psychedelic Furs if they were 10 feet tall and armed with railguns. The song caused me to pause when I started digging into it.  I just couldn’t get a feel for it until I looked carefully at the lyrics and they pulled me back it. I tried to find writing credits for the lyrics and couldn’t so if you know who wrote the lyrics for Love Falls please put it in a comment below. They are powerful. 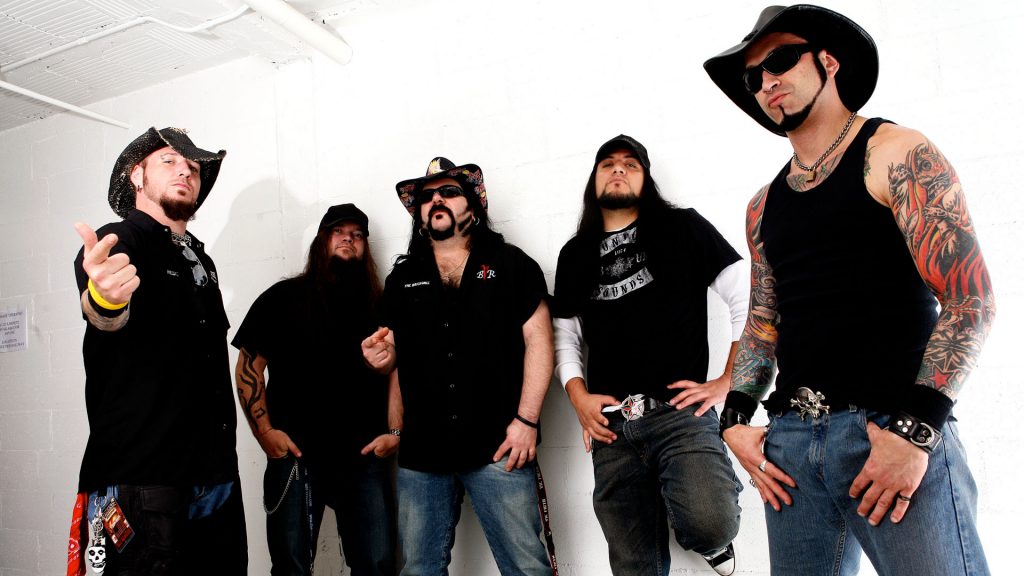 The mix is so drum heavy that I sometimes times have issues hearing the guitar performances, especially on really fast passages. They are tuned so low that the low end gets a little soupy and I have to really zone in on the guitars to hears what’s going on. I’m not sure exactly how to fix this because Vinnie’s toms sound like rolling thunder and I love it and I’m not willing to sacrifice that awesome sound. So a better engineer than me needs to step in and keep the thunder and reduce the soup.

This is only an intermittent issue but it can be frustrating.

I recommend HELLYEAH’s undeniable to anyone who enjoys metal. Don’t get hung up on too many labels, forget whatever sub-genre you think is best and get this album. If you like good music you are going to did this.

I’m giving Undeniable a B due to the final mix. The music is an A, but I must consider the final product as a whole. This record still comes with my absolute recommendation and I’m putting links below to go buy the album so go do that. Don’t buy one song or download the record from YouTube. Go buy the record and vote for quality music with your dollar. It matters.

I hope you enjoyed our review of HELLYEA’s undeniable. If you did please like the video and subscribe to the channel. And don’t forget next week we are reviewing Mark of the Blade from WHITECHAPEL. WE’RE OUT!